Read the latest posts from Paper.wf.

F-Droid is an installable catalogue of FOSS (Free and Open Source Software) applications for the Android platform. The client makes it easy to browse, install, and keep track of updates on your device. The F-Droid client I use is Droid-ify (available on F-Droid). Here are some F-Droid apps I’ve found for June:

Grape Wars: Attack of the Bots

from On the Block

Today I was getting ready for the Grape Finance AMA. Everything seemed fine and dandy but then I saw a particular message that piqued my interest...

“Can we orchestrate an attack on the bot ruining the fun in Gladiators KoC Grape tournament? @Andy_Tomb and myself took him for a fair few grape last night but he's restocked and we don't want to have to have that fight again on our own!”

Bot? Ruining the fun? Not on my watch!

Any player can just send a transaction, pay a small amount of GRAPE (currently 1.08 GRAPE) and become the new king, so you have to defend your position day and night, stopping others from winning the grand reward pool.

However, the fun was ruined when one person decided to build a bot to do this. People had to defend their positions against a bot that didn't need to sleep, eat, touch grass or take a break in any way. It just kept entering.

Game plan: Counter the bot WITH a bot

I brainstormed ideas with people in the #ama-live-chat channel. We had a game plan: outbot the bot, make them give up.

Build a Node.JS bot to watch transactions, test the bot, rent a VPS, maintain this VPS... nah. This idea got scrapped because it's just too much effort and too much cost to just fuck over a bot messing with a game.

We thought a lot and talked a lot in the chat which we now moved to the top secret OG-only #og-chat. Suddenly, it came to me and I sent a message in the thread.

https://gelato.network/ can be used to outsource the execution of tasks, i believe it's reliable enough to be able to send a transaction within a 3 hour range

Gelato Network. It's a system of bots that send transactions at specific times or whenever possible. These automated transactions are incredibly important for this!

Now, I didn't have to code in JS with a blockchain library like ethers.js which I didn't know so well. I could just code in Solidity, a language I've gotten very accustomed to!

It worked on the second try

I then hooked it up to Gelato Network, so it would scan every block, check if my transaction would execute, then if it did, run it to go kick out that enemy bot.

Currently it's at about 5 executions on Gelato (and one test execution to kick that bot out manually!) at the time of this writing. You can see them all in the Events tab on Snowtrace. 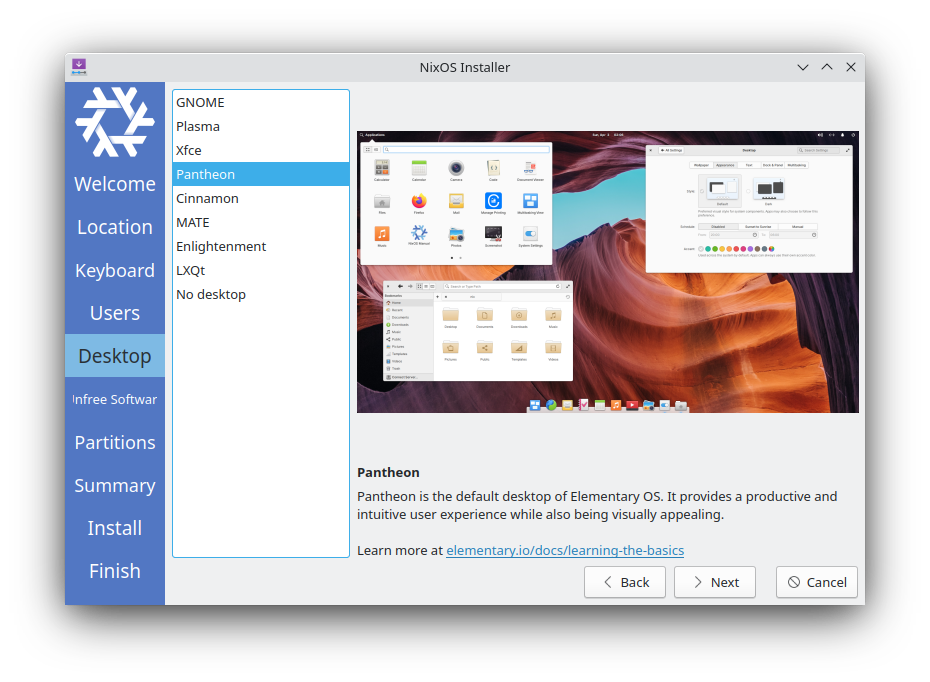 Some distributions gain a small, yet quite vocal fan following for reasons users tend to barely address or explain in such a way that makes those interested feel... quite stupid about themselves. NixOS is described as “a Linux distribution with a special approach to package and configuration management”, meaning its sole selling point is its unique package management called Nix and thus largely aimed at developers. Still, even more specialized distributions with the look-and-feel of a regular Desktop distribution for personal usage should be able to handle passive users just wanting to browse the web.

What its recent version distinguishes from its predecessors is the Calamares Installer, a new addition to simplify the installation process of the OS. This gave me a reason to finally try NixOS out, going for the Live ISO offering KDE Plasma.

Given that I also test the absolute limits of every distribution, I created a virtual machine with the most ridiculous specifications possible. Only one core, just a little more than 1.5 GB of RAM, and only 30 GB available space. NixOS' minimum requirements are not mentioned anywhere on the project's website.

As expected, the virtual environment barely managed to load and KDE Plasma was hardly responsive. Just to see how far I can push things, I attempted an installation, which would freeze the entire virtual machine once it reached 46%. Besides the Installer and a minimal set of tools, such as Konsole and Okular, the Live ISO does not offer many programs.

On bare metal, the live system performed much smoother, with the boot process needing two minutes to finish. This quick test, however, ended as soon as the Installer opened, demanding an internet connection to install the system (and this machine does not support wireless internet).

I briefly checked how well KDE Plasma was implemented. When idle, Plasma needs approximately 860 MB of RAM. Opening an application made the CPU jump to 31% before varying between 0.7 and 6%.

Due to my main machine being the most outdated one, I decided to do another test on another machine with an active internet connection and a little – VERY little – more power. This time, I could grant the virtual machine three cores and 3 GB of RAM, which still is quite pathetic but not as horrendous as the first VM. Unfortunately, I would encounter the same issue my first VM experienced, with the installer first jumping straight to 46% and freezing at this point, with KDE Plasma now being just as sluggish as before and making the laptop overheat. This is where I decided to stop testing.

There is not really much to say, other than repeating the obvious: NixOS is aimed at developers wanting to explore different possibilities of package distribution and management. Personally, I got skeptical as soon as the Installer told me that an active internet connection is required, even though it is a Live ISO offering few core utilities. The project's homepage does not explicitly specify that all ISO's pretty much are netinstalls and requires users to simply get the brief and longer instructions instantly, so even power users not minding to create and maintain packages themselves usually struggle with finding their way through the system.

One reviewer in particular summarized his experience, calling it “the curse of NixOS”. The OS nails its main goal in providing a new and more efficient approach to software management, yet fails in all other aspects, such as requiring to learn an entirely new programming language without proper documentation offered by the project's maintainers. And:

“The second flaw is that NixOS does not actually provide real isolation. Running bash -c 'type $0' will get you bash is /nix/store/90y23lrznwmkdnczk1dzdsq4m35zj8ww-bash-interactive-5.1-p8/bin/bash — bash knows that it's running from the Nix store. This means that all software needs to be recompiled to work on NixOS, often with some terrifying hacks involved. It also means that it's impossible to statically know what other packages a given package might depend on. Currently, the way this is implemented is essentially grepping a package for /nix/store/ to try to figure out what the dependencies are, which is obviously... not great. It also means that binaries that link against /lib/ld-linux.so.2 or scripts that use #!/bin/bash won't work without patching.”

So, it is not suited for average users and not for developers. Ouch.

from The Preacher of Agaduun

No child in Agaduun was a stranger to the corruption and depravity of the Gods. Never spoken of aloud, the stories lived their secret life in the murmurs and whispers of dark houses at nighttime, in the hollows and in the woods, the secret playgrounds, and were well known to everyone.

I spent the journey to Hamzaran in quiet despondency, not speaking a word and refusing food and drink.

The last twenty miles of the way led us through the cursed forest of Hamzaran, where the High Priest kept the terrors at bay only with difficulty. When we had reached the dead city of Hamzaran at the foot of the mountain range, they made me eat a small meal and then turned back into the forest, leaving me alone in the wasteland at the outskirts of the abandoned city. Only one rider remained behind at the edge of the forest, watching me intently for two hours. Then he mounted his horse and sped away into the forest, following the others, after setting the forest ablaze.

This is to teach you that the closer you get to the divine, the more forlorn you will be.

from The Preacher of Agaduun

I was born in Agaduun the son of a taylor and a blacksmith. Nobody expected that I would want to turn my attention to preaching, since I was a very loud and obnoxious child. But about at the age of eleven, the spirit visited me, and I became quiet and pious. The change did, of course, not go unnoticed, and after a few weeks, the village elder stood in front of our door and declared I had been chosen to visit the Gods in the mountains of Hamzaran.

You will never be able to imagine how I screamed that night, my dear disciple.

This is to teach you that you should not be afraid of screaming.